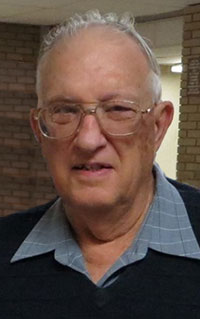 The late Dr. Billy Joe La Rue, Chanute, Kansas, has been selected by the Kansas State University College of Veterinary Medicine’s Alumni Association for its 2015 Alumni Recognition Award to be presented during the annual Central Veterinary Conference held in Kansas City, Missouri, on August 29. The award is given to veterinarians whose careers have served as exemplary role models for future alumni in a professional and community setting.

Dr. La Rue was born in Iola, Kansas, and grew up just north of Chanute, Kansas. He graduated from Chanute Senior High School in 1950, and attended Chanute Junior College (now Neosho County Community College) before transferring to Kansas State College (now Kansas State University), Manhattan, Kansas, in the summer of 1951. He married Barbara Ann Ebert in 1953 in Chanute and graduated from K-State in 1956 with both a Bachelor of Science and Doctor of Veterinary Medicine degrees. While at K-State, Dr. La Rue was a member of the Reserve Officers’ Training Corps and was commissioned as a first lieutenant in the United States Army Veterinary Corps. Dr. La Rue attended the Army’s Meat and Dairy Hygiene School for three months, and was then assigned to Fort Benning, Georgia, where he inspected and approved all food products entering the fort. He also provided veterinary care to the fort’s war dogs and other animals on the premises.

After serving in the Veterinary Corps, Dr. La Rue returned to Chanute in August 1958. He and a K-State classmate, Dr. Don McReynolds, formed a partnership and opened Animal Medical Center in September 1958. Drs. La Rue and McReynolds practiced veterinary medicine together until Dr. La Rue’s death on March 8, 2015. They received a proclamation from the Kansas Senate in 2014, honoring them for the longest continuous veterinary partnership in Kansas’ history.

“Dad would have acted embarrassed, and asked if the college had either made a mistake or run out of veterinarians to receive this award,” Brian La Rue said. “He would have thanked the college for the award, saying how much it meant to him to be recognized by his peers. Dad then would have said his success is shared with Animal Medical Center’s staff: veterinary partner Dr. Don McReynolds, associate veterinarians Dr. Meghan Vorhees and Dr. Roxanne Wallace, registered veterinary technician Sue Alford, and clinic support staff Tracie Gold and Kerri Meister. He would have also thanked Mom and his children for all of their support on the home front. He would have also thanked the faculty and staff of the college for never treating him like ‘the village idiot’ when he would call for a consultation on a difficult case. Dad was grateful for the educational opportunities K-State afforded him, and after he graduated, he did what he could to support the University’s mission.

“For example, when Dad returned to Chanute from Fort Benning, he used the experience he had while in the Veterinary Corps to help establish regular monthly meetings of the Southeast Kansas Veterinary Medical Association,” Brian La Rue said. “He believed it was important for veterinarians to treat each other as colleagues. He also thought it was important for the area’s veterinarians be afforded as many high-quality, low-cost educational opportunities as possible.

“Dad would have concluded his acceptance speech by claiming he didn’t deserve this award, but if the college was going to give it to him, by golly, he would take it home with him.”

“We’re saddened by the news of Dr. La Rue’s passing and regret having lost the opportunity to recognize his career much sooner,” said Dr. Tammy Beckham, dean of the College of Veterinary Medicine. “Dr. La Rue was clearly passionate and dedicated to the practice of veterinary medicine. He was also a tremendous leader and mentor. He will be missed, but his spirit lives on through his many accomplishments and through this award.”