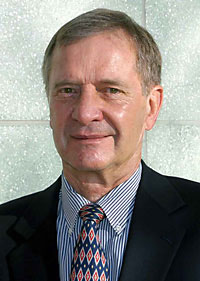 Dr. William G. Kvasnicka, Shawnee, Kan., is the 2011 recipient of the Alumni Recognition Award at the Western Veterinary Conference held in Las Vegas on Feb. 21.

Dr. William Kvasnicka earned his undergraduate degree in animal science in 1952 and his DVM from K-State in 1956. After graduation, he served in the U.S. Army Veterinary Corps for two years. In 1958 Dr. Kvasnicka began practice in Hastings, Neb. He served as the attending veterinarian for the USDA’s Agriculture Research Service Meat Animal Research Center (MARC) in Clay Center, Neb., from 1974 to 1985.

In 1985 Dr. Kvasnicka accepted the veterinary extension/research position for the College of Agriculture, Biotechnology and Natural Resources at the University of Nevada in Reno, Nev. The extension and research programs addressed beef and sheep cattle reproduction along with internal parasite prevalence and control. Research publications included introduction of a vaccine to control bovine Trichomoniasis. He formally retired in 2003, but continues to serve the profession by administration of a beef cattle internal parasite database.

“I am honored to receive this award and want to thank the Kansas State veterinary college and Dean Richardson,” Dr. Kvasnicka said. “During my career, I have enjoyed the opportunity to work with many mentors, veterinary colleagues and livestock producers. I have appreciated these productive relationships and the creative exchange of ideas. I especially want to thank my wife and family for their support and encouragement throughout my career.”

“We are delighted to recognize Dr. Kvasnicka with this award,” Dean Richardson said. “He has made a difference in his lifetime as a rural veterinarian, as a leader in agricultural practices and as an educator at the highest level.”

Dr. Kvasnicka is married to Constance (Copeland). They have two daughters: Carol and Jane; and two sons: Kenneth and John