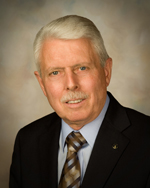 Dr. Knewtson earned his DVM in 1968 from K-State. After graduation, he went to work as a staff veterinarian at the Van Der Loo Animal Hospital in Dubuque, Iowa. After working at the animal hospital for three years, he became owner of the Iola Animal Clinic in 1971. He still operates that practice today.

“It’s a real pleasure to recognize Dr. Knewtson for a career that has been so dedicated to animal health in the state of Kansas,” said Ralph Richardson, dean of the College of Veterinary Medicine. “He has been not only an active leader in his community, but an exceptional leader in the state. At a time when rural veterinarians are becoming a rare commodity, Dr. Knewtson stands out as a great role model and inspiration for our students.”

Dr. Knewtson holds memberships to the American Veterinary Medical Association and the Kansas Veterinary Medical Association (KVMA). He held several leadership positions in the KVMA including: SE KVMA district trustee; KVMA trustee-at-large, vice president, president-elect and president. He is currently president of the KVMA Educational Foundation and chair of the KVMA’s Public Relations and State Fair committee. For his career achievements, he was awarded the KVMA Veterinarian of the Year in 2007 and the President’s Award in 1999.

Dr. Knewston and his wife, Janice, have three children: Michelle, Stacey and Trent.