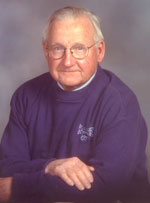 Dr. Kenneth L. Thompson, Guide Rock, Neb., will be honored with a 2007 Alumni Recognition Award by the Kansas State University College of Veterinary Medicine and its Veterinary Medical Alumni Association. The award is in recognition of his time and effort devoted to advancing veterinary medicine and for being an exemplary role model for future alumni.

Dr. Thompson will receive the award at the annual winter meeting of the Nebraska Veterinary Medical Association on Jan. 22, 2007.

Growing up in Guide Rock, Dr. Thompson enjoyed showing purebred Shorthorn cattle as a boy. He remembers wanting to be a veterinarian from an early age. Some of this interest was fostered by a local veterinarian who came to his family farm to treat animals.

He then purchased the Guide Rock Veterinary Clinic and operated the practice until selling it in 1981. Dr. Thompson became an associate at the Animal Hospital in Superior, Neb., and is now owner, handling mostly large animal cases. About 70 percent of his time is dedicated to cow-calf and herd health work. The remaining 30 percent is spent performing soundness examinations on bulls for purebred production sales. He has two facilities, with one dedicated to large animal obstetrics.

Dr. Thompson cited many K-State professors who were influential to him while in veterinary school, including Drs. David Carnahan, Dan Upson, John Noordsy and Fred Oehme. He remembers one time when his class was involved in investigating an outbreak of Hog Cholera in Northeast Kansas before the disease was eradicated. “It was really great,” Dr. Thompson said of his time in veterinary school.

He has a keen interest in small ruminants and raises sheep that are sold for show in 4-H and FFA projects. He also serves as superintendent of the sheep show at his local county fair. Dr. Thompson has written journal articles on leptospirosis in sheep and many articles for goat publications.

He has always been very active in his community. His civic involvement includes serving 12 years on the Guide Rock City Council, on the Nuckolls County Extension board and memberships in the Lions Club and Elks Lodge.

Dr. Thompson and his wife, Evelyn, are proud parents of two children, Darren and Michelle, and enjoy spending time with their nine grandchildren. Dr. Thompson helps all of his grandchildren show sheep in 4-H, and last year they showed 24 lambs at the State Fair. “We enjoy watching the grandkids grow,” he said.