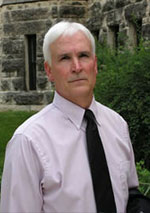 Dr. Jaax is the associate vice president for research compliance and university veterinarian at Kansas State University. His responsibilities included university-wide oversight and compliance with applicable laws, regulations and guidelines for animals used in research and teaching, research programs involving human subjects, and activities involving recombinant DNA and biosafety. While at KSU, Dr. Jaax has been the principal investigator on a multimillion dollar research project, and has authored numerous articles, book and encyclopedia chapters on diverse topics including laboratory animal medicine; human subjects’ research compliance, and emerging infectious disease and response. He is a widely quoted national authority on issues associated with biowarfare, bioterrorism, agro-terrorism and laboratory animal care and use programs involving high consequence pathogens.

“It is an incredible honor to be recognized in this way by the college and the alumni association,” Dr. Jaax said. “It is safe to say that this award would astound the vast majority of the ’68-72 teaching faculty, regardless, it is still an honor. Although practice will always be the essential core of our profession, we should never forget the increasingly vital contributions our colleagues are making every day in the public practice arena.”

Dr. Ralph Richardson, dean of the College of Veterinary Medicine, said, “Dr. Jaax has enjoyed an extremely distinguished and prominent career in veterinary, laboratory animal, and military medicine. He is truly at the forefront of issues that affect our country and the world, and as such, sets an impressive example for students, researchers and practitioners.”

In 1998, after 26 years of active service, Dr. Jaax retired from the Army at the rank of colonel. During his career he worked in a number of professional capacities, including medical defense against chemical and biological warfare programs, professional mentor for laboratory animal medicine officers, post-graduate lab animal medicine training program director and many other duties common for a veterinary medical officer.

After earning a DVM from K-State in 1972, Dr. Jaax entered the U.S. Army Veterinary Corp. Following post-graduate training at USAMRIID in 1984, he became a diplomate of the American College of Laboratory Animal Medicine (ACLAM). From 1984 to 1989, he served in medical chemical defense programs as chief of the Veterinary Medicine and Laboratory Resources Division, at the U.S. Army Medical Research Institute for Chemical Defense at Aberdeen Proving Ground, Md.

From 1989-1997, Dr. Jaax served as chief of Veterinary Medicine Division, United States Army Medical Research Institute of Infectious Diseases at Ft. Detrick, Md. He concurrently served as the director of the U.S. Army’s post-graduate training program in laboratory animal medicine with an academic appointment at the Uniformed Services University of the Health Sciences in Bethesda, Md.

For six years, Col. Jaax was the “consultant” to the Surgeon General of the Army for the specialty of laboratory animal medicine, serving as the professional and career mentor for more than 70 military board-certified and in-training laboratory animal medicine veterinary officers. While assigned to U.S. Army Medical Research Institute of Infectious Diseases (USAMRIID) at Ft. Detrick, he was a key participant in the Reston Ebola virus outbreak, in Reston, Va. – described in the No. 1 NY Times bestseller, “The Hot Zone” by Richard Preston.

From 1997-through 1998, Col. Jaax was the director of the Biological Arms Control Treaty Office, U.S.A. Medical Research & Material Command, Ft. Detrick. As such, he was the DoD implementing agent for the Biowarfare Convention, and was responsible for compliance of the Army with all applicable biological arms control laws, treaties and agreements. He also worked with the State Department in biowarfare counter-proliferation, and cooperative threat reduction efforts in the former Soviet Union.

During his career, Dr. Jaax has earned a number of military awards, including the National Defense Service Medal, Army Service Medal, Overseas Service Medal, two Army Achievement Medals, four Army Commendation Medals, four Meritorious Service Medals and the Legion of Merit. He was elected to the prestigious Order of Military Medical Merit, and was awarded the “A” Proficiency Designator in LAM by the Army Surgeon General.

Jerry is married to Nancy Jaax, a veterinary pathologist and KSU CVM Alumni Fellow, who received her DVM from K-State in 1973. They were the second active-duty couple in the history of the Army Veterinary Corps, and are the only couple to have both achieved the rank of colonel. They have two children: Jason and Jaime.