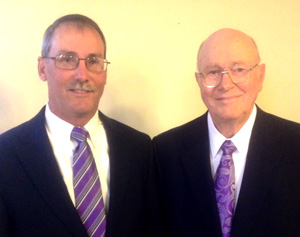 Dr. Alvin J. Edwards and Dr. Tom Edwards, Kearney, Nebraska, are the recipients of 2014 Alumni Recognition Awards presented at the American Association of Bovine Practitioners Conference (AABP) held in Albuquerque, New Mexico, Sept. 19. The father and son are being recognized by the Kansas State University Veterinary Medical Alumni Association in the College of Veterinary Medicine.

“This is a very special opportunity for us to recognize two outstanding Kansas State veterinarians together at one conference,” said Dr. Ralph Richardson, dean of the College of Veterinary Medicine. “Alvin was an important member of college faculty for a number of years and he has contributed research toward feedlot medicine and best practices. His son Tom has carried on the family tradition in a more practical setting, but has already established himself a highly respected member of the cattle industry and veterinary community.”

Dr. Alvin Edwards earned his DVM at K-State in 1959 and was on the faculty in the College of Veterinary Medicine in large animal medicine from 1979 to 1991. Prior to his studies at K-State, he was a sergeant in the U.S. Marine Corps. f­­rom 1950 to 1954 and served in the Korean War for the last two years of his service. Dr. Edwards went into private practice from 1959 to 1974 and the returned to K-State where he completed a Ph.D. in pathology in 1979. He has also served as a consultant in feedlot medicine and retired in 1996. In 1995, he was recognized by the AABP as its Practitioner of the Year.

Dr. Edwards was president of the Academy of Veterinary Consultants (AVC) from 1978-1979. In addition to the AVC and AABP, he is a member of the American Veterinary Medical Association. He and his wife, Carma, have five children: Linda, Marcia, Janice, Tom and Genelle.

“I am so very honored for the alumni recognition award and it makes it even more special receiving the award with my son, Tom,” Dr. Alvin Edwards said. “The friendships and time spent being in veterinary medicine have been some of the best times of my life.”

Dr. Tom Edwards is the owner of Midwest Feedlot Services Inc. in Kearney. He earned his DVM at K-State in 1995. In 2001, Tom began working with Feedlot Solutions Ltd. to consult on software for the United States market. He was president of the Academy of Veterinary Consultants from 2006 to 2007.

“Thank you for selecting my Dad and I for this award,” Dr. Tom Edwards said. “Growing up around veterinary medicine, Dad was always my role model. I strive to be as good a role model to future veterinarians.”