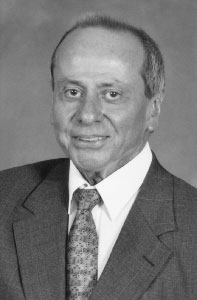 Leo A. Whitehair has been director of the Comparative Medicine Program for the National Center for Research Resources at the National Institutes of Health since 1989. He is responsible for more than 200 research and resource projects and an annual budget of approximately $70 million.

Whitehair's professional experience began in 1953 as a research assistant with the University of Wisconsin, which let to his graduate studies in animal nutrition.

From 1954 to 1958, at the rank of lieutenant and later captain in the U.S. Air Force, he served as a task engineer in nutritional physiology at the Aerospace Medical Laboratory at Wright-Patterson Air Force Base, Ohio.

Between 1958 and 1961 he was a graduate student in the department of food science/animal science at the University of Wisconsin, where his thesis was titled "Influence of Intramuscular Fat Levels on Organoleptic, Physical and Chemical Characteristics of Irradiated Pork Muscle."

He completed a one-year assignment in 1961 as a veterinarian with the Armed Forces Food Research Institute's Nutrition branch in Chicago, Ill. During 1962-1967, Whitehair was promoted to lieutenant colonel and served as a veterinarian-food scientist, program director and project officer with Division of Biology and Medicine at the U.S. Atomic Energy Commission in Germantown, Md.

Whitehair held the position of grants associate with the U.S. Public Health Service Grants Associates Administrative Program for NIH in Bethesda, Md., from 1967 to 1968. While receiving training for one year, he also had assignments in various NIH institutes, the Food and Drug Administration and National Science Foundation.

Between 1968 and 1975, Whitehair was a health scientist administrator with the Animal Resources Program at the NIH Division of Research Resources.

Whitehair directed seven Regional Primate Research Centers research programs involved the use of nonhuman primate models. For the next three years he was affiliated with the American Red Cross' Biomedical Research and Development Laboratories and the NIH Laboratory Animal Sciences Program.