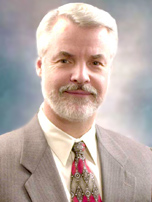 Daniel C. Richardson, DVM, Diplomate ACVS, will be honored by the K-State College of Veterinary Medicine and its Veterinary Medical Alumni Association (VMAA) by naming him the College's 2004 Alumni Fellow. Dr. Richardson and his wife, Kathryn, (KSU BA '74 Bio. and MS '76 Bio.), will be in Manhattan from February 23-24, 2004. As an honored and deserving alumnus, the college and university will host Dr. Richardson and his wife during their visit. The awards are to be presented at a banquet hosted by the K-State Alumni Association on February 24 at 6:30 p.m. in the new Alumni Center. He will be receiving his award along with nine other Fellows representing the Colleges of Agriculture, Arts and Sciences, Architecture Planning and Design, Business Administration, Education, Engineering, Human Ecology, Technology and Aviation.

Dr. Richardson will deliver a luncheon presentation to the College of Veterinary Medicine student body and faculty entitled, Follow Your Own Yellow Brick Road, in Frick Auditorium at noon on Monday, February 23.

Dan, the son of a K-State Professor of nutrition in the Animal Science Department, Dr. Draytford Richardson, grew up in Manhattan, Kansas with an abundance of family member encouragement towards his continued education that included: older brothers, David, a 1965 K-State Putnam Scholar, MA, PhD University of North Carolina in English Literature (a Spenserian Scholar); Ralph, a 1970 K-State DVM, now Dean of the College of Veterinary Medicine; and mother Edna, a Furman College graduate, county home economist, home economics teacher and women’s basketball coach in South Carolina. Also, very key to Dan’s successes academically and in every aspect of his life was meeting and later marrying Kathryn Yonning in 1975.

Dr. Dan Richardson's career in veterinary medicine started with his graduation from K-State's College of Veterinary Medicine in 1977, but more education in veterinary medicine was to follow. After graduation Dan and Kathy headed to Alabama where he finished an Internship in Small Animal Surgery/Medicine in 1978. He then proceeded to the University of Tennessee, in Knoxville, where he became the College of Veterinary Medicine’s very first Surgery Resident, finishing in 1981.

Teaching and academics became the next job descriptions for Dr. Richardson when he accepted an Assistant Professor of Surgery position at the Purdue University School of Veterinary Medicine in West Lafayette, Indiana. He remained there until 1983, when he took an Assistant Professor of Surgery position in the North Carolina State University (NCSU) College of Veterinary Medicine. While at NCSU, he was also an Associate Faculty Member of the Department of Biological and Agricultural Engineering in the College of Agriculture and Life Sciences. He was promoted to Associate Professor at NCSU in 1989 and stayed in Raleigh until 1991 when he accepted an Associate in Clinical Nutrition position in Topeka, Kansas with Mark Morris Associates, the developer of the Science Diet® and Prescription Diet® line of pet nutrition products.

After moving back to Kansas to work for Mark Morris Associates, Dr. Richardson did not completely leave academia. He has held Adjunct Associate or Full Adjunct Professor of Surgery positions at NCSU and K-State’s Colleges of Veterinary Medicines from 1991 until present.

With the retirement of Dr. Mark Morris Jr. in the early 90's, the company became part of Hill's Pet Nutrition Inc. Dr. Richardson became Director of Advanced Research at Hill's. In 1998 he was promoted to Director of Research and in 2002, to Vice President of Research, a position he holds today. Hill's, a subsidiary of Colgate–Palmolive, is a $1.2 billion business and global leader in the premium petfood market. They produce the Science Diet® and Prescription Diet® petfood brands which are sold in over 85 countries.

Dr. Richardson has accumulated numerous achievements and honors during his academic and business careers. He became a Diplomate in the American College of Veterinary Surgeons in 1983. As a faculty member, he received the Norden Distinguished Teacher Award at both Purdue and North Carolina State University. He was named Outstanding Clinician, Urban Practice, at the University of Tennessee; to the Dean's list at Kansas State University, 1975, 1976 and 1977; and was winner of the Irwin Scholarship Award for Proficiency in Small Animal Surgery, Kansas State University.

Dan and Kathy's living on several acres outside of Topeka has helped foster his love of gardening and landscaping, and as Dan said, "in a ten acre way." He has also developed a growing passion for welding. He is assisting K-State CVM Senior Development Director, Tim Chapman, in a series of sculptures by welding the gesture form armatures from Tim's illustrations. "My background in orthopedic surgery has made it fun to engineer welded supports for Tim's sculptures," Dr. Richardson explained. "The goal is to make it easy for him to hold, turn, and work on his creations."

"My veterinary medical education, combined with having teachers and mentors that instilled in me a mindset of lifelong learning, has given me the skills to take advantage of many career opportunities. I am very proud to be a DVM and even more proud to be a K-State graduate," said Dr. Richardson.