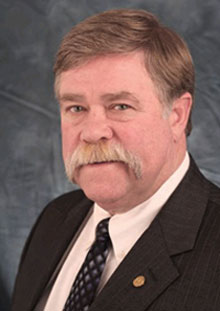 Manhattan, Kansas: The last 12 months have been very significant for Dr. Gregory S. Hammer, a veterinary practitioner who earned his DVM at K-State in 1973. In July 2007, he reached a pinnacle in his profession by being named president of the American Veterinary Medical Association (AVMA). This month, he will receive another superlative distinction — that of Alumni Fellow — from his alma mater.

As a deserving alumnus, the college and university will host Dr. Hammer and his family on campus from Feb. 27-29 for a series of lectures, festivities and other activities. The K-State Alumni Fellows program, sponsored by the Dean's Council, the President's Office and the Alumni Association, will present its Alumni Fellows awards to Dr. Hammer and the recipients from K- State’s eight other academic colleges during a banquet on Feb. 28 at the Alumni Center.

“This is a tremendous honor,” said Dr. Hammer, who grew up in Bonner Springs, Kan. “I was blessed with a loving family and tremendous mentors while I was at K-State. Without Dr. John Noordsy, the late Dr. Russell Frey and my class of 1973, I could never have accomplished what I have. I am humbled to represent the College of Veterinary Medicine as the 2008 Alumni Fellow.”

“Dr. Hammer’s accomplishments are self-evident,” said Dr. Ralph Richardson, dean of the College of Veterinary Medicine. “His appointment as president of the AVMA demonstrates impressive leadership skills, and it shows the respect he has earned in the profession. We had already recognized Dr. Hammer with an Alumni Recognition Award in 2001 at the AVMA convention, so we now take great pride knowing that the university is recognizing him further with its ultimate alumni award.”

Dr. Hammer is a small animal and equine practitioner in Dover, Del. He is owner and partner of Brenford Animal Hospital, where he has worked for 33 years. While at K-State, Dr. Hammer was inducted into the Phi Eta Sigma, Alpha Zeta and Phi Zeta honor societies. With the rank of captain in the U.S. Air Force, Dr. Hammer was a veterinary medical officer from January 1974 to January 1976 and received the Meritorious Service Medal. He was named 1997 Delaware Veterinarian of the Year.

Prior to election as president of the AVMA, Dr. Hammer served six years on the AVMA executive board and 13 years in the House of Delegates. He is active in the Dover community where he and his wife Karen live. They have two children, Scott, a family physician, and Jill, a speech language pathologist.