Dr. Harold E. Garner has been chosen to receive the 2002 Alumni Fellow Award for the College of Veterinary Medicine. 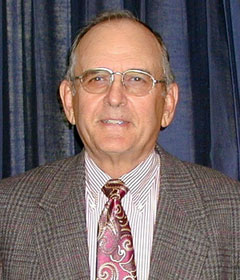 As a deserving alumnus, the college and university will host him and his family on February 25-26 for a series of lectures, festivities and other activities. The KSU Alumni Association will present Dr. Garner, and other Alumni Fellow Award recipients from various colleges throughout campus, with the award during a banquet on February 26 at the Manhattan Country Club.

Dr. Garner earned three degrees from Kansas State University, a bachelor's in 1957, a doctor of veterinary medicine in 1962 and a master's in pathology in 1964. He worked in private veterinary practice and at the University of Illinois-Urbana for several years. He returned to school in 1968 and earned a PhD in cardiovascular physiology and biomedical physics from Baylor College of Medicine in 1971.

Shortly thereafter, he accepted a faculty position at the University of Missouri-Columbia, where he remained until 1992. He served as Professor of Veterinary Medicine/Surgery and Research Investigator for more than 20 years. He led a cardiovascular research team utilizing ponies for comparative studies of coronary collateralization. Another major area of his investigation was equine laminitis and endotoxin mediated disorders. During this time, he also served two years as Associate Dean for Research and Graduate Studies.

Research on endotoxin resulted in vaccines and an antiserum patented by the University of Missouri. A private company, IMMVAC, INC., which Dr. Garner co-owned until 1996, produced the products. After retiring from the university as a Professor Emeritus, he performed additional research to satisfy USDA requirements for the licensure of several cross-protective anti-endotoxin vaccines and antiserum products.

In 1996 Dr. Garner and his wife, Patsy, ventured into two new businesses. Otter Creek Ranch in Greenwood County, Kan. is a yearling cattle-pasturing operation. BioNova in Columbia, Mo. is the production company for SCID-bovi mice, which are used for studying bovine diseases, vaccines and basic immunological research.

Dr. Garner has been recognized throughout his career for his contributions to the field of veterinary medicine. Notably, he was the recipient of the First Bolshoi Equine Research Award in 1987 and elected to the Equine Research Hall of Fame at the University of Kentucky in 1992. Dr. Garner has authored over 200 articles, chapters, professional papers and abstracts.

Congratulations, Dr. Harold Garner, on your many accomplishments.