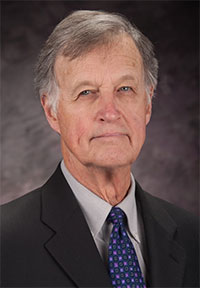 A Kansas native, Dr. James Coffman is retired from a career as an educator and veterinarian. He earned a bachelor’s degree in 1960, DVM in 1962 and master’s degree in pathology in 1969, all from K-State. After earning his DVM, he operated a private equine practice in Wichita from 1962-1965. He served on the faculty of the department of surgery and medicine from 1965-1969. After two years in private practice in Oklahoma City, Dr. Coffman served as professor of equine medicine at the University of Missouri from 1971-1981. He also was director of the Equine Center there from 1973-1977. Dr. Coffman returned to K-State in 1981 as the head of the Department of Surgery and Medicine. This marked the beginning of his 28 year tenure at K-State where he has served as dean of the college of veterinary medicine from 1984-1987 and provost from 1987-2004.

Dr. Coffman also has lectured nationally and internationally and has written or co-written more than 120 professional articles and two books. He has a bachelor’s degree in veterinary medicine, a master’s degree in pathology and a doctor of veterinary medicine, all from K-State. Dr. Coffman and his wife, Sharon, have three sons, all K-State alumni.