It is a discovery that spans decades and careers: A team of researchers at Kansas State University, the University of Missouri and global agricultural biotechnology company Genus plc has developed pigs that are resistant to the most devastating disease in the swine industry. The disease — caused by the porcine reproductive and respiratory syndrome, or PRRS, virus — has cost the U.S. pork industry more than $10 billion since it first appeared in the late 1980s.

From Nov. 16 to 18, the Center of Excellence for Emerging and Zoonotic Animal Diseases (CEEZAD) at Kansas State University held its annual general meeting at the environmentally friendly Lied Lodge in Nebraska City, Nebraska. The meeting brought together more than 100 national and international participants gathered in a major initiative to link up CEEZAD principal investigators, other researchers, animal health companies, animal agricultural industry stakeholders and federal administrators and employees.

Meet Dr. Mike Sanderson, our featured researcher of the month. Watch this month’s video interview at Lifelines online as Dr. Sanderson explains the focus of his research work is on food security and mathematically modeling disease and disease transmission in beef production systems.

Watch the video at regular size ...

A newly identified virus has been a real pest for pigs. Researchers in the KSVDL identified the virus as a member of the aptly name pestivirus family. A sample was submitted from a veterinarian in North Carolina from a swine herd where uncontrollable shaking, or intention tremors, was observed and resulted in the death of nearly 700 pigs.

“The pigs were shaking so badly they couldn’t walk, couldn’t stand and couldn’t swallow,” said Dr. Benjamin Hause, an assistant professor in the College of Veterinary Medicine.

Friday the 13th was a lucky day for a group of 27 Kansas State University undergraduate students, who share a passion for animal health. The College of Veterinary Medicine welcomed these students into its Early Admission Program during an afternoon ceremony in the Mara Conference Center in Trotter Hall.
Since being established in 1999, the Early Admission Scholars program has recruited the best and brightest undergraduate students who want to study veterinary medicine. After acceptance into the program, satisfactory completion of the 64 hours of pre-professional requirements, and at least three years of undergraduate work at Kansas State University, the scholars are guaranteed admission into the College of Veterinary Medicine.

Hard work has its rewards. Dr. Charley Cull, Oakland, Nebraska, is a graduate student in the College of Veterinary Medicine who has already completed a Doctor of Veterinary Medicine degree, but is in the process of working on a Ph.D. A research paper he wrote has earned him recognition as the 2015 recipient of the Mark Gearhart Memorial Graduate Student Award, which is presented by the Association for Veterinary Epidemiology and Preventive Medicine.

The Veterinary Health Center at Kansas State University has teamed up with K-State Athletics for the second year to bring you the Willie’s Pet of the Week Contest during football season! This year, nearly 200 pictures were submitted and about 15,000 votes were cast. The top 10 pictures were evaluated and the winner was chosen and presented during the second quarter of the last home football game when K-State beat West Virginia.

See the winners below ...

Brucellosis stinks — and in more ways than one – partly as a symptom, but mostly in diagnosis and treatment. It is a disease caused by an intracellular bacterial organism that can infect and pass between several species including humans. 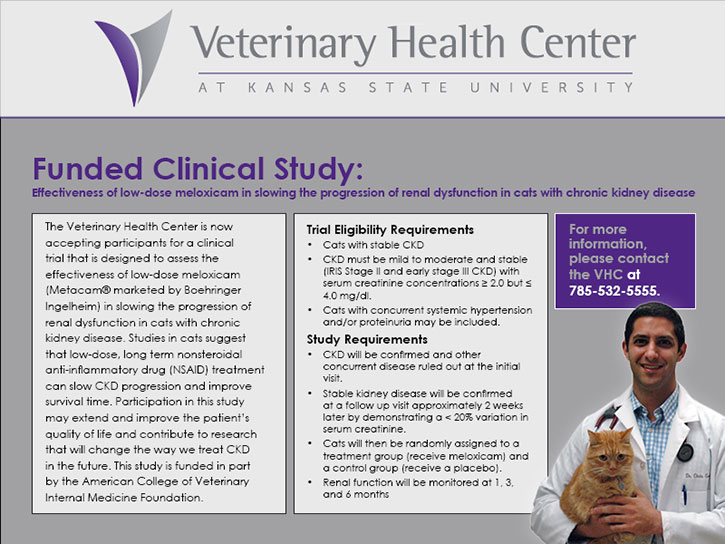 See news and upcoming events below ...

The College of Veterinary Medicine has a new way to support shelter medicine in Kansas. The Pet Friendly license plate is available to Kansas residents statewide by visiting your local Kansas county treasurer's office.

More activities and accomplishments in the College of Veterinary Medicine:

Click here to see the New Arrivals/Recent Departures at the CVM ...

Lifelines is published each month by the Development Office at the College of Veterinary Medicine. The editor is Joe Montgomery, jmontgom@vet.k-state.edu.