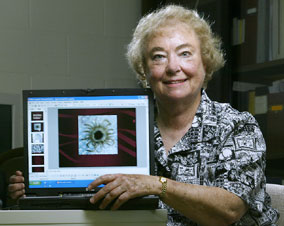 Department of Anatomy and Physiology
College of Veterinary Medicine

When Dr. Jane Westfall came to K-State from California, she felt she wouldn't last two years in Manhattan. But she did last, for more than 35 years, and made significant contributions to the College of Veterinary Medicine.

Jane was raised in Lafayette, California, where she graduated from Acalanes Union High School in 1946. She graduated with honors from the University of the Pacific, Stockton, California, with a bachelor’s degree in zoology in 1950. She received her master’s degree in zoology from Mills College, Oakland, California, in 1952, and her doctorate at the University of California at Berkeley in 1965. She received an undergraduate scholarship at Pacific, and a teaching fellowship at Mills.

Jane’s first position was as a research assistant in zoology at the University of North Carolina at Chapel Hill in 1952. She spent the following year at the Stazione Zoologica in Naples, Italy, as a Fulbright Scholar. In 1954, Jane began her doctoral work at the University of California at Berkeley, but took time off in 1957 to work full time as a laboratory technician, first in the department of physiological chemistry, then in the department of zoology. In 1962, she returned to the program and completed her dissertation.

In 1967, after two years as an assistant research zoologist at the University of California at Berkeley, she accepted an assistant professor position at K-State.

Jane is an active member of the Manhattan and K-State communities. She is a member of Friends of McCain Auditorium, Friends of the Beach Museum of Art, Friends of KSU Libraries and Friends of Sunset Zoo. She is an elder in the First Presbyterian Church and a member of the Ten Thirty Investment Club, the English-Speaking Union and the League of Women Voters.

Although she retired in 1999, Jane often returns to her campus office. She is currently organizing a symposium on neurobiology for the International Conference of Coelenterate Biology.