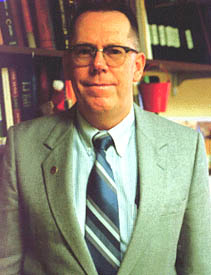 Exercise-induced pulmonary hemorrhage in race horses causes serious economic loss to the horse industry by preventing potentially excellent athletes from competing. This problem results from ruptured pulmonary capillaries due to excessive blood pressure development during sprint exercise in these animals.

We are investigating the cause of the elevated pulmonary vascular pressure and have focused on the impact generated by the increase in blood viscosity following splenic contraction. Packed cell volume may increase in systemic venous blood from 0.40 at rest to 0.65 or higher during exercise causing apparent blood viscosity to double at high shear rates. Although this increases the resistance to flow through the lungs, it can not account for the full extent of the elevated pulmonary pressures.

We are also developing techniques to determine if a limitation in cardiac function may contribute to the high pulmonary vascular pressure in the sprinting horse. We are studying the resistance to blood flow across the atrioventricular valves and the rates of contraction and relaxation of the ventricular myocardium when horses run at high speeds on a treadmill. We hope to identify the reason for high mean left atrial pressure in the sprinting horse and to find ways to reduce this pressure, thereby lowering pulmonary vascular pressure and preventing pulmonary hemorrhage during racing.