Are bacteria and viruses associated with microplastics? A One Health challenge

During the 19th and 20th centuries, scientists developed a very promising material that used polymers as the main ingredient: plastics. Since 1950, the production has risen approximately by 8.5% each year to reach 368 million tons in 2019. However, as with many human innovations, there are unexpected and uncontrolled secondary effects. Indeed, humans have been unable to manage plastic wastes – to date, 67.9% is still poorly managed– as plastics are burned or buried. It is estimated that between 4.8 and 12.7 million tons reach the oceans every year and that oceans could count more than 5 trillion plastic particles.1 Plastic pollution is separated into three main particle sizes: macro- (>5 mm), micro- (5 mm–100 nm), and nano- (<100 nm).2 The geographic ubiquity of plastic pollution in the oceans induces several worrying hypotheses as 1) Short, medium, and long-distance ability to move;3 2) Transport of invasive or pathogenic agents; 3) Carriers of environmental contamination (e.g., heavy metals, cycloolefin polymers)4 4) Internalization and ingestion by marine living organisms from the first links of the trophic web to top predators. 5) Toxicity for living organism. In this article, we will review the actual knowledge about the origin of microplastics (MPs), their direct effects on living organisms, and their interaction with bacteria and viruses.

Plastic pollution belongs entirely to human activity; therefore, it is important to reduce emissions of plastic waste in the environment and minimize its consumption. The origin of such pollution could be explained by the following two processes:

Waste mismanagement. Historically, waste disposal has become a major constraint to continuing living in a healthy environment. Once the rivers were no longer sufficient as waste excavators, humanity developed controlled or uncontrolled landfills to manage their waste. Of the 2.01 billion of municipal waste (not just plastic) produced per year in the world, the landfill technique is the main method (70%), as compared to recycling and composting (19%), and the incineration (11%). This non-sustainable technique is one of the main sources of plastic pollution.5

Maritime transport. Every year, it is estimated that 1,390 containers are lost at sea, participating in tons of waste in the ocean. In 2021, in Sri Lanka’s waters, 78 metric tons, equivalent to ~8 billion MP beads, spilled into the ocean following the sinking of a super-container. The main sources of primary MPs (size ≤ 5 mm) that enter the aquatic environment are cosmetics, textiles, tires, paints, coatings, and industrial pellets. While secondary MPs (84,5-96,3% of the marine MP pollution) are from the degradation of macroplastics already in the aquatic environment (Figure 1). 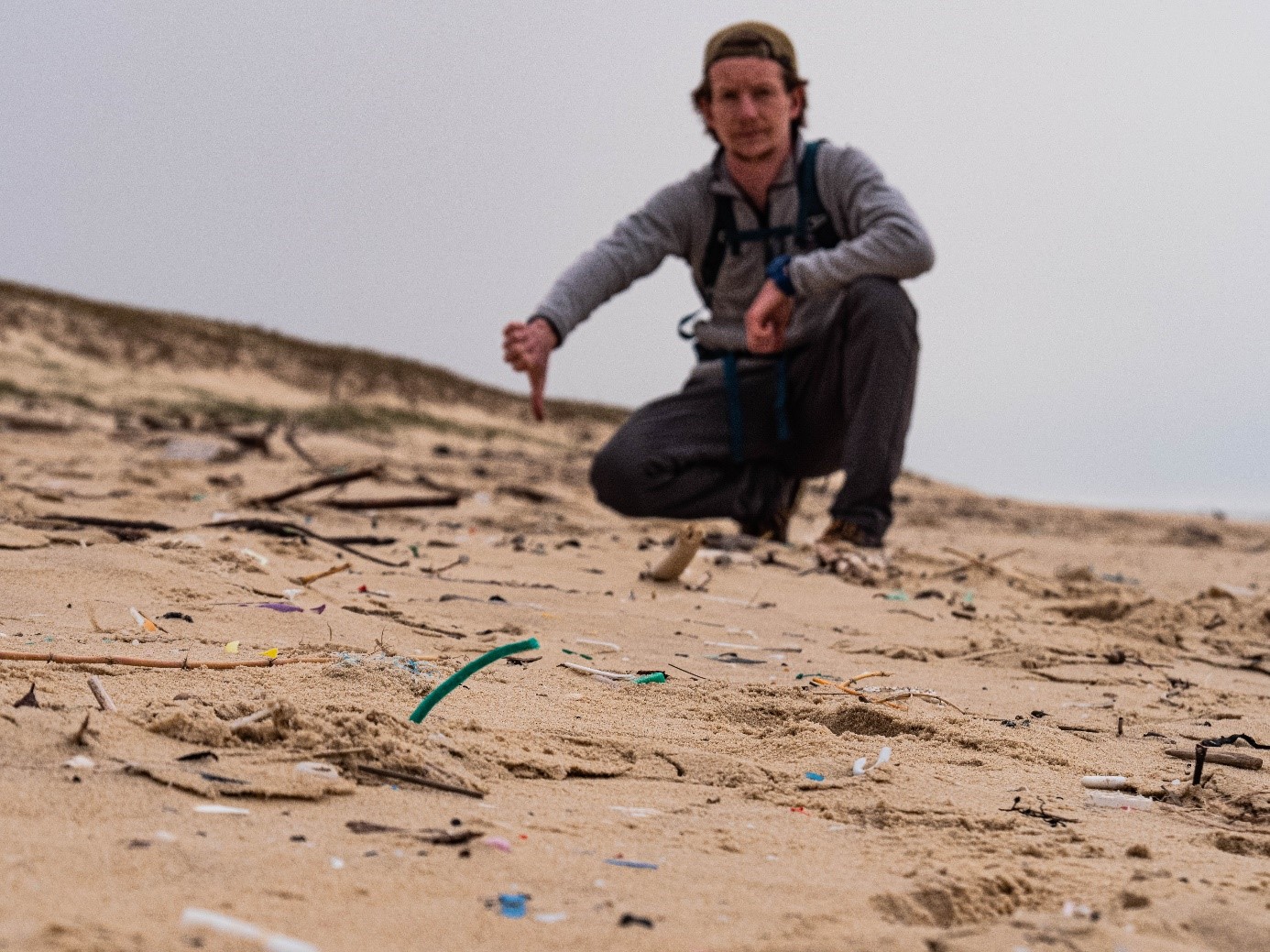 Apart from maritime transport and potentially fishing activities, marine plastic pollution, potentially toxic to any ecosystem, comes from inhabited land, pushed by the wind or via runoff and rivers.

Consequences and toxicological effects of MPs

Numerous cases of MPs ingested by zooplankton have been observed (Figure 2): on 6,000 plankton samples, 60% were contaminated by MPs. Even in the nine deepest hadal zone, MPs were found in amphipods. Ultimately, MP ingestion is not restricted to the bottom species and concerns all the trophic web. 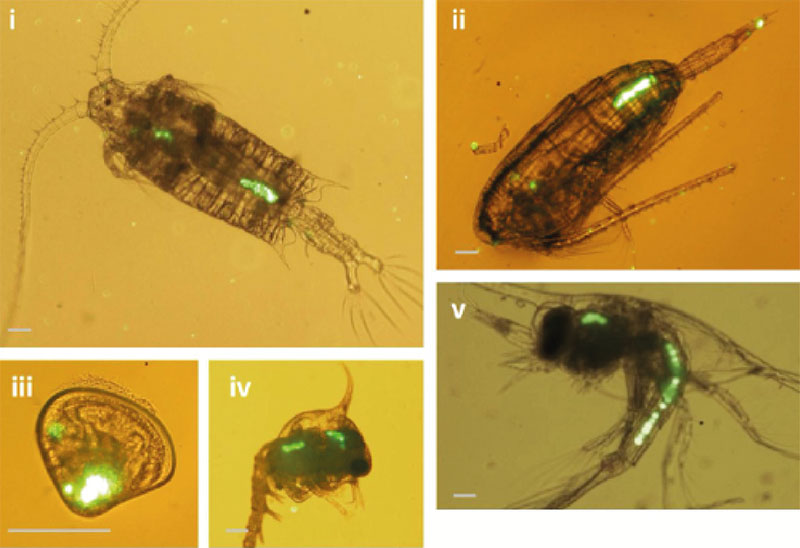 Ecotoxicological studies on the MPs are increasing dramatically, and many organisms’ responses are being tested with results ranging from no effects to lethal consequences.

Direct impact on zooplankton. Different direct effects of MPs on zooplankton have been shown, especially engendering a reduction of prey ingestion. For the copepod, this impact 40% reduction of carbon biomass ingested, inducing energetic loss, decrease in egg size, hatching, and reproduction, change in mobility, and growth abnormalities. Because MPs are continuously bioavailable potentially resulting in energetic deficiencies in copepods, that could have repercussions on the health and the population. Effects on gastrointestinal cells of brine shrimp have also been observed with an abnormal quantity of lipid droplets in the intestines resulting in deregulation of enzymes and leading to a decrease in nutrient absorption.

Indirect impact. A plastic polymer is completed with additives to change its properties. Such additives are released during their use and degradation. Also, that topic is not all consensual: some exposed that MPs and additives induce DNA modification, decrease heart rate, change mobility, and decrease growth and reproduction, while other studies showed a negligible effect. A polymer has a great capacity for adsorption and desorption of environmental chemicals such as persistent organic pollutants (POPs), polycyclic aromatic hydrocarbon (PAHs), and heavy metals. Indeed, Polychlorinated biphenyls (PCBs) spiked on MPs could penetrate the cyst wall of copepod eggs and are also known to have generated embryo abnormalities in sea urchin larvae.

Potential for viral and bacterial transmission of MPs

As MPs have numerous effects on organisms' health and ecosystems, a new threat could be MPs acting as a vector of pathogens, in particular bacteria and viruses from plastic waste in the oceans (i.e., source of MPs). Once in an aquatic environment, MPs are quickly colonized by micro-organisms forming a biofilm around the plastic that is characterized by a complex structure of single or multiple species of microorganisms attached to a solid surface and enclosed in an extracellular polysaccharide matrix. Such biofilm could include bacteria found in marine waters but also species that can cause human enteric infections (e.g., Vibrio spp., Campylobacter spp., Enterobacteriaceae). Also, living within a biofilm can be beneficial for microorganisms. Some bacteria have acquired antibiotic resistance genes and have been found in concentrations 100 to 5,000 times higher on microplastic biofilm than in the surrounding water seawater. Although this phenomenon is already known for natural particles (e.g., pieces of wood or sand), MPs have a higher long-range dispersion and are more likely to be ingested.

Moreover, the interaction between viruses and bacteria is demonstrated in these biofilms. Using metagenomics, various bacteriophage viral communities (e.g., Myoviridae, Siphoviridae, and Podoviridae) were found in the experimental MPs collected after 30 days in freshwater accounting for more than one-fifth of all contigs assembled of known viral sequences. It was also found that polypropylene (PP) had 100 times stronger interactions than the other polymers, while the compositions of the viral DNA assemblies in the PP were comparable to those found in marine and freshwater ecosystems (i.e., bacteriophages Caudovirales order). Altogether, these observations suggest that PP is an important host of viruses in aquatic ecosystems.7 On a larger scale, to understand the potential health hazard to humans, through direct or indirect contact of MPs with pathogens along the trophic chain, numerous factors need to be considered (Figure 3).8 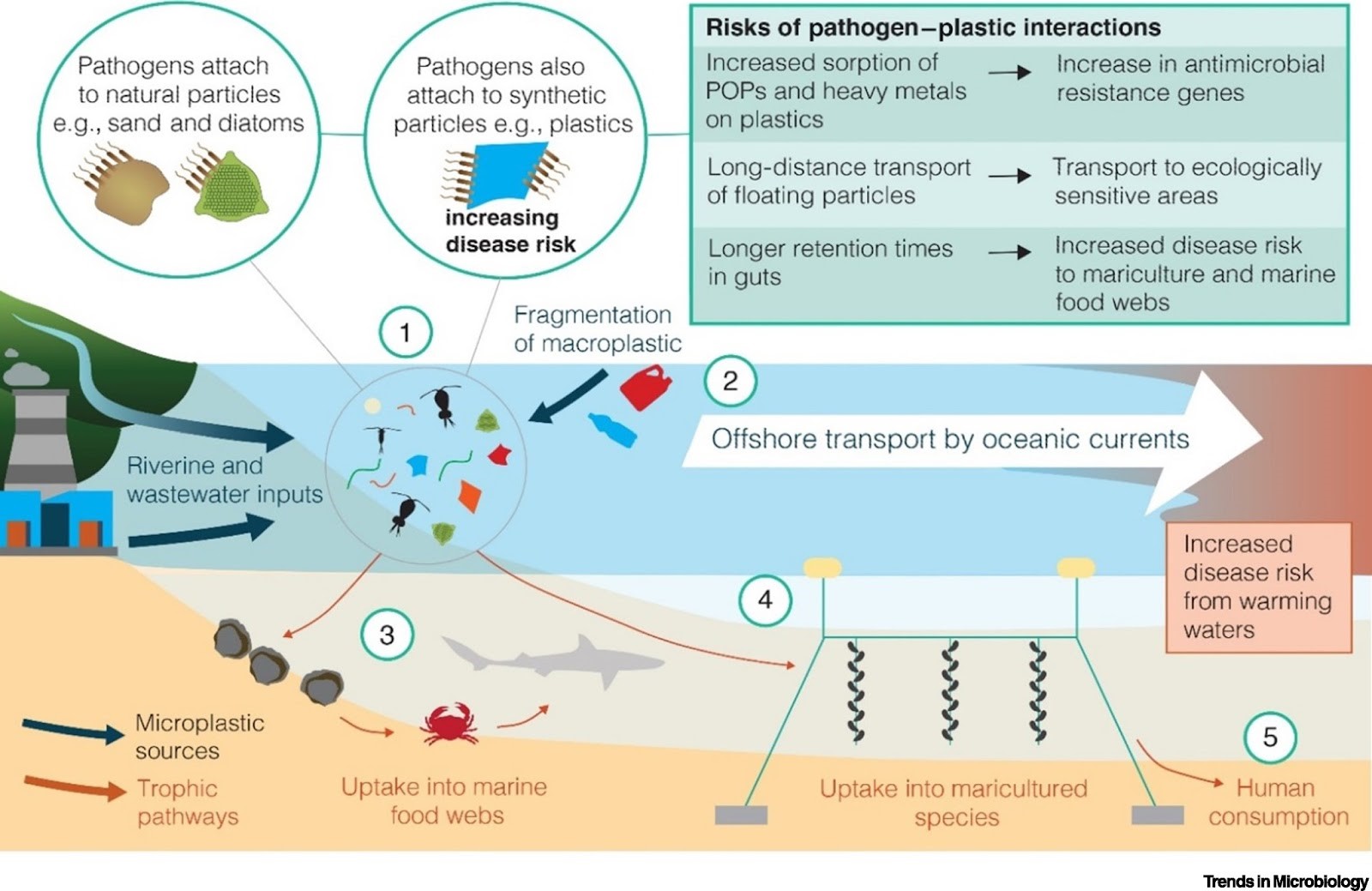 Figure 3: Summary of potential pathogen interactions with microplastic particles in marine ecosystems.8 "Factors influencing the probability of risk of disease transmission by MPs into several points: (1) The role of the polymer surface in influencing microbial attachment processes. (2) The rate and distance of transport of floating particles colonized by pathogens across the oceans. (3) Ingestion of PM contaminated by filter-feeding organisms and subsequent trophic transfer rates. (4) Uptake and retention of particles in maricultural organisms. (5) Human consumption of potentially contaminated fish and shellfish." (Source: Bowley et al., 2020)

This review offers insight into the emergence of MPs, where zooplankton plays an essential role in aquatic ecosystems and beyond allowing the transfer of energy from primary production to higher trophic levels. Altogether, a transdisciplinary from environmental to medical sciences approach is needed to understand and fight against the growing impact of MPs on public and veterinary health. It is in this context that a positive One Health approach is unavoidable and urgent to implement.

Today, waste mismanagement reflects the short-term view of our societies and the threat of our dependency on plastic in daily life. For centuries, we constantly innovate without fully understanding the secondary effects that often lead to the degradation of our environment. MPs are certainly deteriorating the oceans, the marine fauna, and flora which are largely connected to terrestrial vertebrates and ultimately humans. Moreover, the potential risk of bacteria and viruses integrated into MP biofilms brings another unappreciated biological risk.

In this context, the international research project PLASFITO (PLAstic FIshing gear TOxicity) (Figure 4), launched in 2021, aimed to investigate the fate and effects of plastic, and additives coming from the degradation of fishing gears in the Bay of Biscay (Eastern North Atlantic). This project brings together a transdisciplinary working group dedicated to producing new knowledge about the MPs, nanoplastics, and additives from fishing activities. In the end, it will be a question of making a rigorous evaluation of the implication of the fishing gear in this pollution linked to plastics. This project aligns with One Health values since it shows a multidisciplinary consortium of researchers, public health workers, economists, and institutional stakeholders.

Next Story: One Health Approach: a solution to control the zoonotic threat of the emergence and spread of the Mayaro virus from the Caribbean and beyond